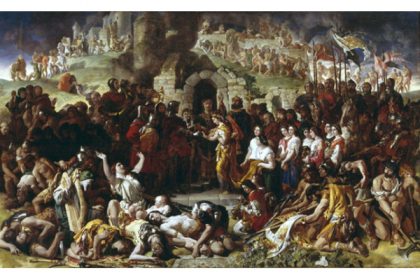 Medieval women,especially those of high rank,  were commonly used to forge and maintain political alliances.  Brought up to ‘know her place and do her duty’, Aoife bore two children, Gilbert who died in 1185, and Isabel who became 4th countess of Pembroke, heiress to large tracts of Wales and Ireland, and thus an extremely valuable commodity.  Isabel’s father died when she was just 4 years old and her mother eight years later.

No less than her mother, the orphaned Isabel was an extremely valuable pawn in a patriarchal world and as such she was made a ward of King Richard I who rewarded his loyal servant, William Marshal, with her hand in marriage and along with her came all her wealth and estates.

It seems that Isabel and William’s relationship may have been a good and respectful one.  When recalled from Leinster by King John, William gathered his nobles at Kilkenny Castle and hand in hand with his pregnant wife, called upon them to stand firmly by her, and protect her and their lands of Leinster, declaring that Isabel was ‘their lady by birth’ thus deserving of their protection, and that he had ‘nothing but through her’.

The cynic, or the realist , might see this as a shrewd political move.  Nonetheless during their marriage they had ten children and while William was away Isabel successfully defended Kilkenny from attack in 1208 by

Meiler FitzHenry, who she managed to capture, and with whom she negotiated a truce which involved him giving up hostages as a pledge for his good behavior.

Isabel proves the old adage that behind every powerful man there is a great woman and in William’s case, one without whom the Marshal could never have become Kilkenny’s ‘Greatest Knight Who Ever lived’.

Images show: The Marriage of Aoife and Strongbow:  http://www.nationalgallery.ie/en/Conservation/Featured_Projects/Strongbow_and_Aoife/The_Painting/Historical%20Event.aspx

The Marriage of Isabel and William Marshal: http://www.rostapestry.com